Before I had surgery and for the years thereafter I have been inspired by a few others who travelled the bariatric path before me. One such is Yvonne, better known as Bariatric Girl. Today she celebrates her 15 year oppiversary! She has learnt a great deal in those 15 years, not least how to lose and moreover MAINTAIN a 130-lb weight reduction. She has very kindly allowed me to reproduce and share here her latest 15 year anniversary blog which is basically a letter to herself but which we all can relate to and learn from …. HAPPY ANNIVERSARY BARIATRIC GIRL!

How I wish we could have had a letter like this when we began our journey because there was almost no one who knew anything in 2001.

Guess what??? WE MADE IT! We actually made it 15 years BUT don’t get overconfident because this could change at any moment.

This is what I know so far.

So many thought I’d fail….

So many more hoped I would.

And even sadder, some were disappointed I didn’t regain my weight and worse, I let them make me feel guilty for it.

2. Some people will do their best to sabotage your journey. REMOVE YOURSELF FROM THOSE PEOPLE! PERIOD…. (I SAID PERIOD) 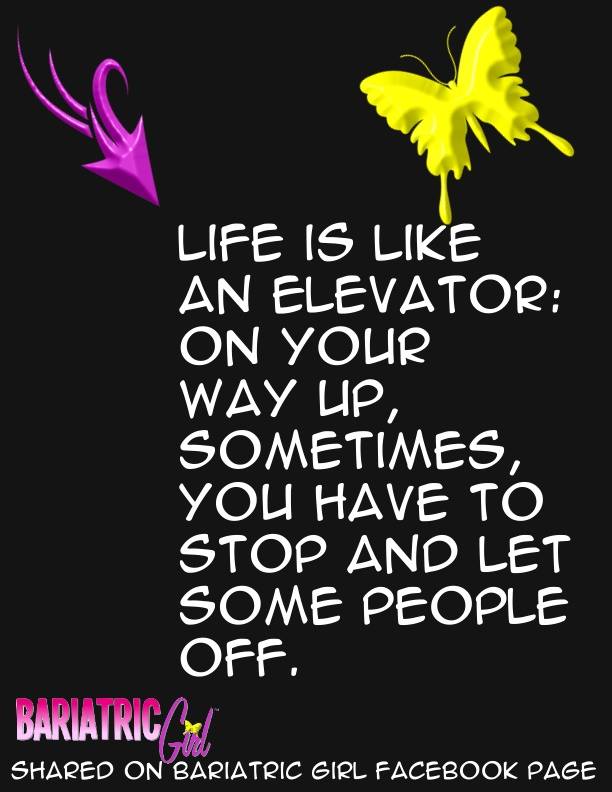 Life is like an elevator. Sometimes on the way up you have to stop and let some people off.

3. Move towards the people who look to you for…. basically….anything.  A word of support or kindness for someone who comes to you for advice may mean mountains to them and they actually want you in their lives!  Instead we often find ourselves looking to people who don’t care about us or we spend wasteful time wanting what they have that we don’t. Don’t spoil what you have by desiring what you have not… but remember that what you have now was once among the things that you had only hoped for!

4. Don’t eat crap food, get it ALL out of your house. If it isn’t in your house, don’t start bringing it in. You could never “eat just one”. Trust me, that hasn’t changed so don’t even test it out. Quit trying to force a square peg in a round hole.  You tried for 30 years to “eat just one” and it NEVER worked so consider not eating any. IT’S SO MUCH EASIER TO DO!

5. Get help for your addiction to food because everything else you do will just be putting a Band-Aid on the problem. If you don’t get help for the root problem, you won’t overcome it. Don’t get caught up on whether it’s called addiction, emotional eating… it’s whatever you want to call it. At least call it something, identify the problem, and move towards a solution because you can’t fix what you don’t acknowledge. Um DUHHHHH.

6. Support. Get some. Give some. Refer back to #2. Do not stay in a support group where people become energy vampires that suck the blood from your body. YOU WILL LOSE YOUR BATTLE IF YOU CAUSE MORE STRESS AND CHAOS TO YOUR JOURNEY.

7. Here’s my post where an organization has gathered data from thousands of people who have lost and maintained their weight. Doesn’t it make sense to take the tips reported and try them? These simple tips worked for the majority of people. If what you are doing isn’t working, why not mimic what worked for thousands? What do you have to lose? And if you can’t or are unwilling to try those methods, you must make peace with what you are doing. Get on and live your life instead of beating your head up against a wall. You’ll look up one day and your life will be gone.

I’m pretty sure if you follow these suggestions and keep it simple that you can continue to do this thing. Perhaps most importantly don’t let the phrase “one day at a time” become cliché. It is one of your simplest rules to apply…..to stay in the now. Worrying is praying for what you don’t want. SO STOP IT!

Lastly….always remember to pick your hard. 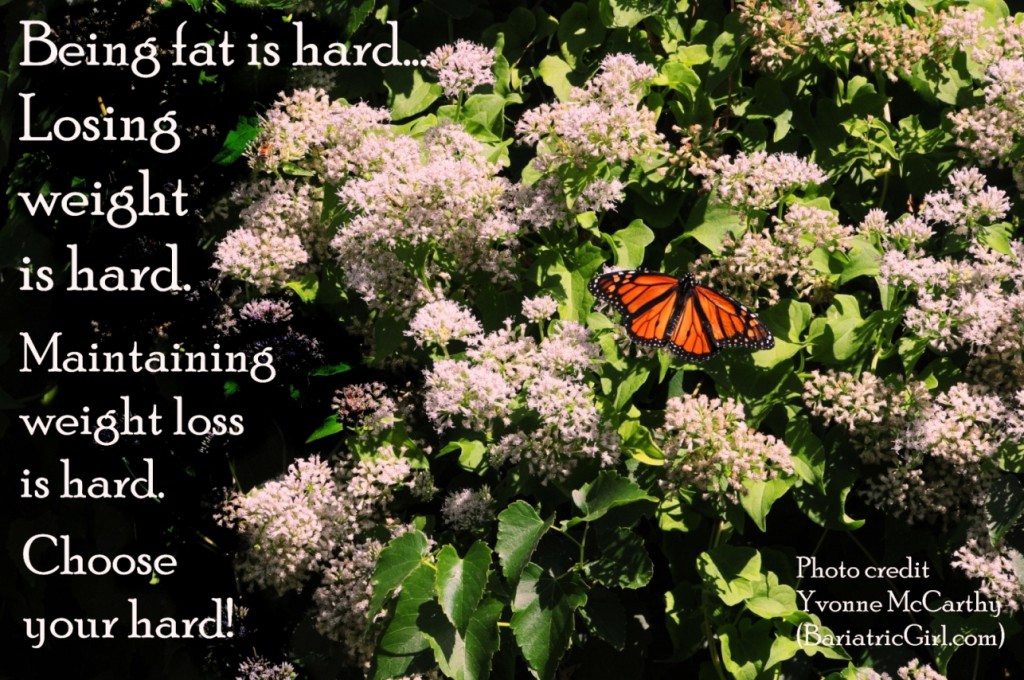 Who is Bariatric Girl?