How losing weight can strain a marriage 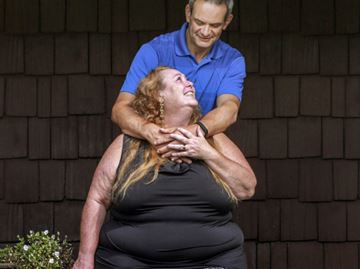 By Andrew Francis Wallace,Torstar News Service
Jim Crosby and his wife Lorraine Charland pose at their Oshawa home. The couple talk about their emotional roller coaster when Jim went from close to 400 to180 pounds:

For Jim Crosby, at 370 pounds, there was no epiphany, no “aha!” moment. He heard the weight loss ad on the radio, as he had so often before, and just thought: “It’s time.”

He registered that day, plunking down $4,000 for a year’s membership plus personal coaching. Then he went home and told his wife.

What followed would tip the scales of their marriage, testing its mettle.

She was furious he spent so much money without discussing it. He had a history of yo-yo dieting and not following through on commitments. “I thought, oh my God, here we go again,” says Lorraine Charland

Then, as he dropped 170 pounds over 15 months, she watched her shy, couch potato husband transform into an extrovert and fitness fiend. He took up ultimate Frisbee, whitewater rafting, even sky-diving. He attracted the attentions of flirtatious women.

“I’m not going to candy-coat it. We fight. We argue,” explains Charland. “He’s on a quest and it’s really hard for me to keep up.”

He was angry at her for always being mad at him. “I felt she was trying to hold me back,” says Crosby, 54.

While many marriages flourish when a spouse sheds weight, others can flounder. “Massive weight loss, and maintaining it, is life-changing,” says Dr. Valerie Taylor, the mental health chair of the Canadian Obesity Network. “Suddenly couples can find they don’t have as much in common.”

In blogs and websites, the term “bariatric divorce” is bandied about, meaning a failed marriage after weight-loss surgery. But obesity experts don’t yet know how common that might be. “I wouldn’t say it’s the norm or majority of cases,” says Dr. Sanjeev Sockalingam, director of the bariatric surgery psychosocial program at Toronto Western Hospital.

Researchers are currently investigating the marriage repercussions, since emotional support is crucial to a patient’s success. At Toronto Western, social workers are interviewing spouses about marital issues that emerged. And at St. Joseph’s Healthcare in Hamilton, a study of 250 bariatric surgery patients is looking at long-term effects, including what happened to patients’ relationships.

“People are concerned and ask before a partner’s surgery, ‘Should I worry my spouse will leave me?'” says Taylor, head of St. Joseph’s bariatric surgery psychiatry program. “We don’t have a lot of good data for them.”

She suspects the clue lies in the quality of the marriage pre-weight reduction. “I don’t think massive weight loss creates serious problems in a healthy marriage,” says the psychiatrist. “But it can cause difficulties in a relationship that’s already strained. It could precipitate the beginning of the end.”

Before Crosby’s extreme weight loss, he and Charland had been working to improve their relationship frayed from difficult years raising their daughter and autistic son. The boy was finally starting to flourish, and Crosby was more available on the home front. He’d switched to a new job as a project manager for a nearby company, so he was no longer commuting four hours each day.

During their stressful years, the Oshawa couple packed on pounds. “We’re both emotional eaters,” says Charland, who hit 300 pounds at one point. “I wouldn’t eat for six hours, then I’d binge on garbage,” recalls Crosby, who reached 400 at his largest.

Then in April 2012, he impulsively joined Harvey Brooker Weight Loss for Men. “Lorraine thought, ‘How dare you, without consulting me,’ but I knew if I didn’t do it right then, I never would,” he explains.

He cleared out the house of junk food. She brought more in. “I was so angry,” Charland explains. “We were trying to work things out together and here he goes off on his own.”

At a session for spouses offered by the Harvey Brooker program, she watched as one wife berated her obese husband, humiliating him in front of everyone. “It made me look at myself: Am I that bad?” recalls Charland. “That was a huge turning point.”

Following her husband’s lead, Charland started eating simple, healthy meals. But her weight loss has been slower. In a year she shed 50 pounds. Diagnosed with a genetic heart defect, she has not been able to exercise much, she says. She had a pacemaker implanted last year and went through cardiac rehabilitation.

Meanwhile, slimmed-down Crosby has been working out at a fitness club nearly every day and greedily grabbing at new experiences. He belly danced for a charity fundraiser. He went skydiving. That one stunned Charland. “Here I am with a pacemaker and two kids and he wants to jump out of a plane.”

Of the duo, Crosby had always been the introvert, and Charland the outgoing one. “My personality was morphing into hers,” he says.

“The man I married was reserved, and I was the centre of the world,” laughs Charland.

As a marriage and family therapist, Shyamala Kiru sees similar couples who struggle after one partner loses weight. It’s not always the main issue that brings them in, but it comes up during therapy — the conflicts over time, the insecurities the other spouse feels.

“Weight loss isn’t just physical,” says the Markham therapist. “So much of it is mental, the boost in self-esteem and confidence. When you feel different about yourself, you make different choices.”

That newfound confidence can be reflected in the bedroom. One wife who lost 80 pounds started buying lingerie and initiating sex. Her husband, says Kiru, enjoyed her enlivened sexuality but also felt intimidated. “It was like being with a different woman. He’d always been the initiator, the pursuer. Their roles shifted.”

The wife had also become fanatic about her fitness regimen, to the exclusion of spending time with him. In therapy, says Kiru, he was pleased when his wife invited him to work out with her.

“What’s fascinating as a therapist is that when couples marry, they never know where it’ll end up. People change,” says Kiru. “It’s how you navigate the changes together.”

That’s where Crosby and Charland stand now, trying to navigate together.

They talked about the attention he was getting from other women. He assured his wife that while it was flattering, it meant nothing to him.

“In all my pushing the envelope,” says Crosby, “I completely missed one central fact: Lorraine felt left out.”

The couple now shares more activities, such as guitar lessons. Their first duet will take place at a recital next month. She has joined his fitness club and he’s promised to help her get started.

“For all the anger along the way, I’m also very proud of him. You have to be, dammit,” Charland laughs, rolling her eyes.

“The reward,” says her now healthy husband, “you get me for another 30 years.”

Has your weight-loss after bariatric surgery affected your marriage – in a good or bad way?  Do you think there is something labelled ‘bariatric divorce’? Please share if you feel it will help others.